Vajay Szabolcs (1921-2010), hungarian historian, genealogist and heraldist left Hungary in 1943, and while living in Argentina, France and Switzerland, constituted an important specialized library which is presently under the custody of the Károlyi József Foundation in the stately home of Fehérvárcsurgó.

The library’s highlight topics are: 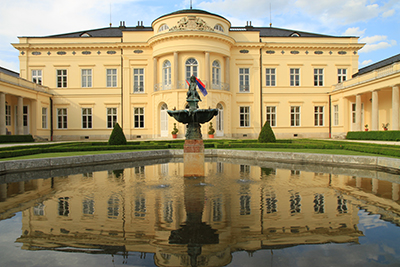 Beside these books the library has a very important collection ofspecialized periodicals and proceedings upon heraldic and genealogy. Most of the periodicals are bound and almost each book has Vajay Szabolcs’s personal ex libris. The books as well as the periodicals are mostly in Hungarian, French, English, German, and Spanish. The collection is completed by the valuable card indexes which offer information about Hungarian families and ennoblements.

A third component are the archive files of the personal researches carried out by Vajay Szabolcs upon various themes of genealogy and heraldic. His correspondence in relation with his researches is also to be found here, as well as the drafts and researches for his publications.

Though the classification is not yet completed (but the register of his whole library made in Switzerland can be consulted), the library can be visited by researchers on an appointment basis with the statement of the field and reasons of research. The researchers can also be hosted during the time of the researches in the hotel rooms of the stately home.