The Joseph Károlyi Foundation established by the Károlyi family in 1994, has turned the Fehérvárcsurgó stately home into a European Cultural Meeting Centre, part of the European network of „Cultural Centres located in Historical Monuments”, thereby ensuring the rehabilitation the and preservation of a major historical monument while putting it to use as the setting for a dynamical cultural project of public interest. Thus the project both justifies the restoration and ensurer perpetuation of the activity.

The Documentation centre as a field research centre, specialized in European history and international relations provides a special opportunity to various areas of study in history and political science as well as sociology and is an appropriate centre for the study of Central Europe. 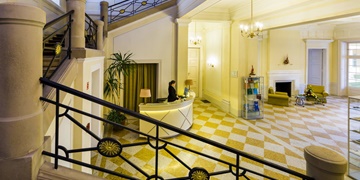 EXTRAORDINARY ANNOUNCEMENT
The management of the hotel has decided to terminate the operation from 19.03.2020 until further notice.
DETAILS