The Library contains more than 7,000 volumes in French, Hungarian, English, Italian and German in the following areas.

Associated with the library is also a collection of press releases under process, which touches upon all the topics examined by Ferenc Fejtő, and complement the book collection. The press cuttings go back to 1945, or even before the war. The cuttings originate from the more importent western and Hungarian newspapers, and they put a different complexion on the various events. In certain cases they have added notes. They are classified according to themes and in chronological order, in accordance with the library’s classification system. The files include numerous extracts as well as notes from various conferences and colloquies. We draw attention to the unique nature of certain documents, especially news agency reports as well as information from Free Europe Radio and reports from central European news agencies before 1989.

The files can be used in the library and photocopies can be made.

Finally, readers have at their disposal an important periodical collection(more than 350 titles but incomplete) about French, English, Italian and Hungarian social science in alphabetical order. There are also Hungarian literature periodicals available. We endeavour to make up for the shortcomings which may occur in the collection. We are to provide the researchers with a full list. Naturally the collection will be added to whenever possible.

The József Károlyi Foundation is bringing about a special collection of Ferenc Fejtő’s works, and is classifying his personal archives. The consultation is possible, Ferenc Fejtő or the Scientific Committee will consider the application. The archive includes the collection on the record comments about Ferenc Fejtő’s work as well as professional and private letters, not to mention personal notes, handwritten and typed works and articles.

The foundation looks after part of Aurél Kolnai’s archives which is still to be processed. We warmly welcome anybody interested in researches in this field. 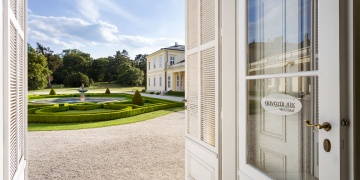 Important Changes
From 1st September 2021 all of our guests (regardless to their age) must present and hand over their ID cards or passports for document scanning at the time of check-in to our hotels due to modification of the Act no. CLVI/2016. of Hungary.
More